Discover the latest technology news and learn about new product introductions from ams. 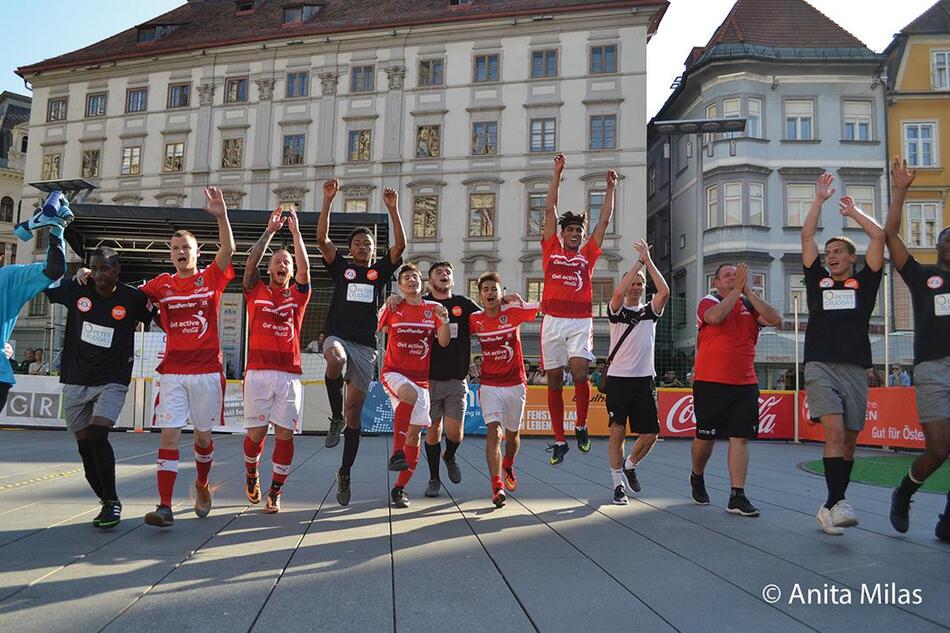 Premstaetten, Austria (28 May, 2019) -- ams (SIX: AMS), a leading worldwide supplier of high-performance sensor solutions, is extending its support of Caritas Austria to sponsor both the Austrian national squads that will participate in the 17th Homeless World Cup in Cardiff, July 27 - August 3, 2019. In addition to financial support, the company will host the squad members to its headquarters near Graz – home of the first Homeless World Cup – for a program of personal development and work-related activities designed to help improve their life and work opportunities after the tournament.

This year’s Homeless World Cup will welcome 64 men’s, mixed or women’s teams fielding four players per game to the ‘street football/soccer’ tournament in the Welsh Capital, Cardiff. Enjoying the Ambassadorship of Welsh Hollywood star, Michael Sheen, the 2019 Tournament intends to create a long-lasting legacy by maximizing exposure for the event, and in doing so change people’s perceptions and understanding of homelessness, while extending employment- and life opportunities for the participants.

“An estimated 100 million people are homeless worldwide – over 15,000 in Austria alone. So, winning the tournament is not the only aim – the ‘winning goal’ is to empower people to succeed at life!” says Michael Wachsler-Markowitsch, Chief Financial Officer, ams. “That’s why ams has pledged to do what we can to support homeless people in our local community via our sponsorship of the Caritas Austria Homeless World Cup project, and the 22 team members (including 16 players) on the men’s and women’s Austrian national squads. We’ll again create opportunities for ams employees to support this great cause, especially in Europe and the United States where national teams are participating – to donate, or to share support on social media or on the sidelines.”

The men’s team will again be managed and trained by Gilbert Prilasnig, a former Austria national football team player who in 2017 received a ‘Human Rights Award’ from the Mayor of Graz, together with Harald Schmied, for his engagement with the homeless. The brand-new women’s team will be managed and trained by Emily Cancienne, a professional footballer originally from the USA who has lived in Austria since 2015 and last year was nominated by the Austrian Sporthilfe organization in the social award category.

The Homeless World Cup was co-founded by Mel Young and Harald Schmied, who came up with the idea following a conference about homelessness in 2001. They wanted to change the lives of homeless people all over the world, and they believed soccer could help them do it. The first Homeless World Cup tournament took place in Graz in 2003, and the event and network has been growing steadily ever since, occupying a pioneering role in the field of sport & development.

What happens to players after the annual Homeless World Cup tournament?

National partners, such as Caritas Austria, integrate football with other approaches locally. When they return, a large percentage of players improve their lives through education, employment in social enterprises and other businesses, substance abuse rehabilitation, and supported housing. An amazing 94% of players consistently say that the Homeless World Cup has had a positive impact on their lives. The feeling of belonging, challenge of working in a team, regaining a health-oriented attitude towards life, self-esteem, experience of representing their country, and last the experience of fun is a powerful combination to change a person’s life.

‘Sensing is Life’ – a human connection

For ams, ‘Sensing is Life’ and our passion is in creating sensor solutions that make devices and technology smarter, safer, more environmentally friendly and easier to use. We are shaping the world with sensor solutions, leading the way in forging continuous connections between people and technology, and envisioning a seamless experience between the two.

Among ams’ core values are a passion to win, engendering trust & integrity, and imagining the impossible – all values which we share with the Homeless World Cup cause.

Notes to the Editor

Getting an accurate picture of global homelessness is extremely challenging. Definitions of homelessness vary from country to country. Census data is typically collected based on household and, while most census data takes into account those living in shelters and receiving government aid, census takers struggle to count the “hidden homeless” – those who may be residing in inadequate settlements such as slums, squatting in structures not intended for housing, couch surfing with friends and family, and those who relocate frequently.

AUSTRIA: According to country’s Social Ministry, there were 15,090 people registered as homeless in Austria as of 2016. This is up from 12,050 in 2014. This number does not include rough sleepers who are not registered. Around 70% of all people experiencing homelessness live in Vienna.

There is also a major crisis in refugee accommodation currently in Austria. In 2015, approximately 85,000 refugees asked for protection. In 2016, 22,000 asylum seekers were still being housed in the Federal Care Scheme. Statistics show that 80% of refugees leaving the Federal Care Scheme (Bundesbetreuung) are at risk of ending up homeless, according to FEANTSA, 2017.

IRELAND: According to the 2011 Census, 3,744 people were in accommodation providing shelter for homeless people and 64 people were sleeping rough. Focus Ireland estimates that there are around 4,500 people homeless at any given time. More than 65,600 people are considered to be unable to reasonably meet the cost of accommodation (FEANTSA, 2012).

ITALY: During the economic crisis, the rate of homelessness tripled in Italy. In 2014, homelessness in Italy was estimated at 48,000 people, 70% of whom were sleeping rough (FEANTSA, 2012; Deutsche Welle, 2014). The 2012 Census showed that 59.4% of people in shelters for homeless people were immigrants. However, many immigrants and Roma people are not considered homeless since they live in informal settlements (FEANTSA, 2012).

NORTHERN IRELAND: Northern Ireland is experiencing the highest rates of homelessness in the United Kingdom, with 5.7% of adults saying they have experienced homelessness. There were 13.4 statutory acceptances of homelessness applications per 1,000 households compared to 2.3 in England, and in 2012/13, more than 19,400 households were reported to be homeless (Belfast Telegraph, 2014).

SCOTLAND: In 2013/14, 36,457 households made homeless applications to their local council in Scotland, a 34% decrease since 2009/10. Young people under 25 represent just under a third of applicants (Shelter Scotland, 2014). In 2014/15, homelessness applications fell as a result of homelessness prevention services rather than a change in the underlying social and economic factors that lead to homelessness (The Scottish Government, 2015).

UNITED STATES OF AMERICA: More than 553,700 people were homeless on a single night across the US, according to the Department of Housing and Urban Development (BBC, 2017). More than 40 million people were living in poverty, and 18.5 million were living in deep poverty, with reported family income below one-half of the poverty threshold. (UNHR, 2017).

The implications of the great recession are still felt. An estimated 3.2 million jobs were eliminated, and 1.2 million homes foreclosed upon following during the financial crash between 2007-2009 (Portland State University, 2018).